In their newest collaboration, Jaclyn and co-author Glenn W. Muschert provide a critical retrospective of the 1999 Columbine High School shootings as the 20th anniversary approaches. Columbine was a watershed event that changed the way America views mass shootings, both in and out of schools. In this book, the authors will consider Columbine’s impact on public opinion about mass shootings, school security, law enforcement practices, threat assessment, legislation, and more. In addition to considering the changes made in the past 20 years since the shooting, the authors also offer consideration of how the nation continues to move forward as we surpass this milestone anniversary.

All royalties from this project will be donated to the Columbine Memorial Foundation. Visit their website at http://www.columbinememorial.org/ to learn more about this organization or to contribute to maintaining this memorial site. 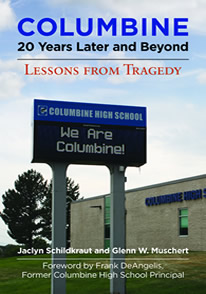 Where To Get Your Copy

Also available through Barnes & Noble and other retailers

In their outstanding volume, Schildkraut and Muschert examine every important thing you have ever wanted to know about the Columbine massacre.  Viewing Columbine as a watershed cultural event, the authors then provide an amazingly perceptive analysis of the larger problem of mass shootings at schools around the country.  Anyone who seeks enlightenment regarding this thorny social problem—criminologists, psychologists, and intelligent laypeople alike—cannot afford to ignore this volume’s important lessons.

The Brudnick Professor Emeritus of Sociology and Criminology and Co-Director of the Brudnick Center on Violence at Northeastern University; Co-Author of The Allure of Premeditated Murder [2018]

Jaclyn Schildkraut and Glenn Muschert have done a magnificent job in documenting the lessons we have learned from Columbine over the past 20 years. Even the most knowledgeable persons will learn from this masterful work. Columbine, 20 Years Later and Beyond fills a glaring gap in our knowledge about the shootings and their effects on the Columbine community and America. Although scholarly and fact-based, the book reveals the authors’ sensitivity and compassion for all those affected by the event. It is a must read for anyone who is seriously interested in the Columbine shootings and their subsequent impact on American society.

Columbine was a watershed event that had wide-ranging and lasting effects on our country; it had worldwide ramifications. Because of its notoriety, much has been written in the wake of Columbine that has been ill-informed, misleading, biased, and shortsighted. In this book, Schildkraut and Muschert have provided a much-needed corrective. They offer a comprehensive and unbiased analysis of the event and its impact. They are to be congratulated on their efforts to set the record straight. It could not come at a better time. Presently any significant historical event is used by ideologists who apparently have no familiarity with the truth to proffer interpretations to enhance their own political views. In cases such as Columbine, where pundits have thrown blame at their favorite targets, such as liberal parenting, removing prayer from schools, toleration of gender diversity, lack of armed teachers, and such that have nothing to do with the actual event, it is important for knowledgeable researchers to provide sober and sensible analyses. This is the glory of Schildkraut and Muschert’s efforts. The truth lives in their work. It is thoughtful, well documented, and evenhanded. I recommend this work without reservation. It is a significant continuation of the contributions of the many scholars who have tried to provide cogent analyses of how Columbine fits into the fabric of American society.

This book is a comprehensive analysis of the wide-ranging influence of the most notorious school shooting in America. The authors explore what has changed as a result of Columbine, as well as the areas where progress has not occurred. From the impact on survivors of mass shootings to the tactics of first responders, from media coverage of rampage attacks to legislative attempts to change firearm laws, from school safety procedures to the influence on subsequent shooters, Schildkraut and Muschert document the nation’s response to a traumatic event that continues to shape our culture twenty years later.

"If we are trying to understand the root causes of gun violence, we need to start by understanding why people pick up firearms in the first place."

ABC-CLIO author @jschildkraut80 speaks to the rising number of mass shootings in the U.S.: http://ow.ly/fTan50MBnSt

.@jschildkraut80 offers a research perspective for this reporting from the @nytimes.

"Public mass shootings are the least common [form of shooting] and the most deadly... And the type of policy interventions that are most likely to avert them are different." https://twitter.com/nytimes/status/1617884967798988802

In the first three weeks of 2023, at least 67 people have been killed in mass shootings across the U.S., including two within days of each other in California. The latest came on Monday, when a gunman killed seven people in Half Moon Bay. https://nyti.ms/3D9xuFD

Thank you @kentisd for hosting me this morning! We covered a lot in our time together, from prevention to response. We also delved into lessons learned from previous school mass shootings. Looking forward to continuing our conversations here in Michigan!

An 11th victim has died in the #MontereyPark mass shooting. Although this individual’s identity has not yet been revealed, other victims have been, including My Nhan (65) and Lilan Li (64). We don’t have to live like this. #EndGunViolence

We’d planned to publish a story this morning about a 6-year-old who shot his teacher, but didn’t, because someone else shot two dozen people last night.

I can’t recall how many times I’ve still been immersed in the coverage of one awful shooting when another one happened.