Understanding the Debates, Causes, and Responses

This book offers a unique hybrid approach to understanding mass shootings in the United States. The book features different research essays from experts in the field on topics including school shootings, mass shootings as hate crimes, gender issues, mass shootings as terrorism, and issues for responding law enforcement personnel. Consideration of the usual suspects of gun control, mental health, and violent media from a range of expert researchers, as well as op-eds, also is included. This unique work even includes an encyclopedia of 50 years of mass shooting events, from beginning in 1966 with the University of Texas shooting and ending in 2016, the year of the Pulse Nightclub tragedy.

All royalties from this project will be donated to the onePULSE Foundation. Visit their website at https://onepulsefoundation.org/ to learn more about this organization or to contribute to establishing and maintaining this memorial site. 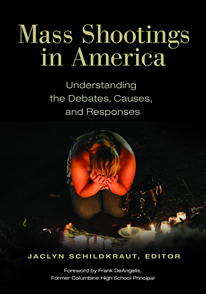 Where to Get Your Copy

Given the fast-growing interest in the topic of mass shootings, as well as the often contentious debate about causes and solutions, the need is great for an edition like this one.  Jaclyn Schildkraut has assembled a superb collection of important research contributed by widely respected experts along with key documents and reports on the topic. I, for one, will keep this volume close at hand for frequent reference.

The Lipman Family Professor of Criminology, Law and Public Policy at Northeastern University, and co-author of Extreme Killing: Understanding Serial and Mass Murder

Jaclyn Schildkraut has assembled an extremely important text exploring MASS SHOOTINGS IN AMERICA: UNDERSTANDING THE DEBATES, CAUSES, AND RESPONSES. Schildkraut and her collaborators have assembled a wide range of texts dealing with key issues of firearms, mental health, violent media and video games, warning signs, and ways to deal with potential school and mass shootings. The text contains invaluable compilation of mass shooting events (1966-2016) and pivotal documents, along with a variety of experts who weigh in on the issue. Presentation is clear and straightforward, and is accessible to a younger audience and the general public, as well as scholars who research mass shootings, and politicians and administrators who are tasked to deal with the problems – although we know all too well that Congress and special interest often block rational responses to mass shootings. Everyone concerned with the epidemic of mass shootings in America should read this book and there should be vigorous discussion of how to deal with the problem of mass shootings and those who would ignore the problem.

UCLA and author of Guys and Guns Amok

Dr. Schildkraut’s book is a wonderful resource for all who are interested in mass shootings. She has provided researchers with important documentation and informative discussions by experts in the field on mass shootings, while also giving interested nonprofessional readers an overview of the many facets of the problem. She has masterfully bridged the interests of both professional and lay communities. The essays in the first section of the book provide an intelligent overview of mass shootings: the debates about perpetrator mental health and motivations, root causes, the role of gender, responses by law enforcement, and prevention are well summarized and presented without bias. In addition, mass shootings are viewed through the lenses of terrorism and hate crimes. The encyclopedia of mass shootings is extremely helpful to researchers because of its comprehensiveness. The synopses of each event are an extra benefit. The essays that present the debate over guns and their access provides an unusual and informative view into the various perspectives on gun control and violence. Finally, the section on important documents related to mass shootings provides valuable resources in a single volume. For anybody interested in mass shootings, Dr. Schildkraut has provided a valuable and easily accessible resource.

Mass shootings are not a new phenomenon, and there is a lot of research available; this work’s value is that it compiles salient works into a single volume suitable for the general reader interested in an analytical treatment of mass shootings in the U.S.

This balanced volume effectively juxtaposes practical and theory-based solutions to the problem and includes opposing viewpoints. VERDICT: An excellent starting point for student researchers and general readers on a topic that is front-page news on an all-too-frequent basis.

There is nothing like reviewing a paper, providing incredibly detailed feedback for the authors, and then receiving the same paper from another journal (as it was rejected from the first) having addressed NONE of the recommendations I and other reviewers offered. 1/

On the latest episode, @PsychBrownBag and @jschildkraut80 discuss the risk factors associated with firearm suicide as well as what policies and tools exist to help to mitigate firearm suicides. https://rockinst.org/issue-area/ep-56-second-chances-matter-reducing-firearm-suicides/

Five years later… Never forget the 58 who lost their lives and the thousands of lives forever changed in just 11 minutes. We must continue to honor with action and prevent others from the same tragedy. #EndGunViolence #LasVegas #Route91

Thank you everyone for your support - Chloe, Bailey, Poppy, and I really appreciate it. I will reply to each comment you took the time to write in the next day or so… today’s just a tough day and I’m focusing on my little corner of the world that’s missing 4 paws.

My little bean Bella crossed the rainbow bridge a short time ago. Although I know my mom is taking care of her now and she’s no longer suffering, it doesn’t make it any easier. Thank you Bells for almost 16 years and a lifetime of memories. Your sisters and I love you. 💔🌈🐾

My little bean Bella crossed the rainbow bridge a short time ago. Although I know my mom is taking care of her now and she’s no longer suffering, it doesn’t make it any easier. Thank you Bells for almost 16 years and a lifetime of memories. Your sisters and I love you. 💔🌈🐾