This book provides readers and researchers with a critical examination of mass shootings as told by the media, offering research-based, factual answers to oft-asked questions and investigating common myths about these tragic events. It tackles common misconceptions about mass shootings perpetrated by and through the media and provides information that grounds the realities of such events in empirical evidence, as well as explores the history of mass shootings, both before and after the infamous 1999 Columbine High School event and shootings that occurred in and out of schools. The book also addresses common myths associated with mass shooting events by the media, such as how often and where they occur and the absence of any warning signs and helps readers understand the realities of these events, including their international reach, the potential warning signs, and how evidence associated with the events can provide clues into why they occurred. 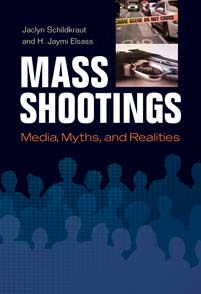 Where to Get Your Copy

Also available through Target, Barnes & Noble, and other retailers

This book is required reading for anyone interested in understanding mass killing events. With a clear voice and insightful analysis, the authors break significant ground in the study of mass shootings, ultimately bringing the history, development, discussion, and prevention of such events into sharp focus.

By writing this book, Professors Schildkraut and Elsass have provided a great service to educators, researchers, journalists, other concerned professionals, and interested laypersons who are trying to understand mass shootings. They provide historical and international contexts to debunk popular notions and have created a clearer picture of the nature and etiology of rampage shootings. Schildkraut and Elsass provide a wide-ranging perspective and a deep knowledge of the literature on mass killings. This book should be required reading.

In Mass Shootings: Media, Myths, and Realities, Schildkraut and Elsass have crafted a highly readable and intelligent examination of both the controversies and the evidence-based conclusions regarding the character and history of mass shootings. Anyone who seeks to understand the myths and realities associated with public mass shootings will benefit a great deal from reading this book.

An important contribution to criminology and the study of mass shootings. Summing Up: Essential. All public and academic levels/libraries.

This is an important and very current topic. Forensic psychologists, clinical psychologists, counseling psychologists, and psychiatrists who work with potentially violent patients, as well as violence researchers, would find this book of interest.

As a whole, this book is an excellent introduction to the problem of mass shootings, and a worthwhile read for anyone interested in the subject. It is full of detailed information about numerous cases of mass shootings―one which provides helpful context for the varied conceptual issues discussed―such as the history and prevalence of mass shootings, research on the causal factors and prevention of these events, and the manner in which mass shootings are represented and fostered in our increasingly ‘mediatized’ society. Each topic is covered in an academically rigorous fashion, but the myriad examples provided throughout the text dramatically increase its readability, especially for undergraduate students and the general public. . . . Far too many mistaken assumptions and myths abound regarding the causes and prevention of mass shootings. Mass Shootings: Media, Myths, and Realities dispels many of these key distortions to provide a more nuanced and research-based understanding of the reality of these horrific events.

"If we are trying to understand the root causes of gun violence, we need to start by understanding why people pick up firearms in the first place."

ABC-CLIO author @jschildkraut80 speaks to the rising number of mass shootings in the U.S.: http://ow.ly/fTan50MBnSt

.@jschildkraut80 offers a research perspective for this reporting from the @nytimes.

"Public mass shootings are the least common [form of shooting] and the most deadly... And the type of policy interventions that are most likely to avert them are different." https://twitter.com/nytimes/status/1617884967798988802

In the first three weeks of 2023, at least 67 people have been killed in mass shootings across the U.S., including two within days of each other in California. The latest came on Monday, when a gunman killed seven people in Half Moon Bay. https://nyti.ms/3D9xuFD

Thank you @kentisd for hosting me this morning! We covered a lot in our time together, from prevention to response. We also delved into lessons learned from previous school mass shootings. Looking forward to continuing our conversations here in Michigan!

An 11th victim has died in the #MontereyPark mass shooting. Although this individual’s identity has not yet been revealed, other victims have been, including My Nhan (65) and Lilan Li (64). We don’t have to live like this. #EndGunViolence

We’d planned to publish a story this morning about a 6-year-old who shot his teacher, but didn’t, because someone else shot two dozen people last night.

I can’t recall how many times I’ve still been immersed in the coverage of one awful shooting when another one happened.